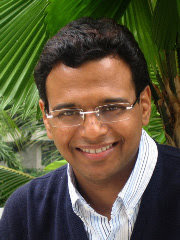 Me [Tristan]: I first came into contact with your work during my research for my upcoming resurrection thriller called Bitten. I read through two zombie books you had written, Alice in Deadland (great title by the way), and Zombiestan. After reading them on my kindle I went online and ordered the paperback editions to have on my bookshelf alongside Patient Zero by Jonathan Maberry and World War Z by Max Brooks. I definitely rank your zombie books with the best of them. So I really do appreciate you taking the time to do this interview. Thank-you.

Mainak Dhar: Tristan, thanks for having me on your blog. Before saying anything about myself or my work, let me say that your novel Bitten sounds exciting. The little that I've read shows a lot of promise and I wish you huge success with it.

1) My first question is: what compelled you to write a zombie book in the first place?

* I have always enjoyed post apocalyptic fiction, because it really forces us to confront what things would be like if all the usual rules and norms that make for 'civilized' society disappear. I've been a keen student of history and if there's anything history teaches us it is that our civilized veneer is at best a thin layer, which often enough is peeled back to reveal the savagery and cruelty we're capable of. For a writer, that makes for rich territory, to showcase both the cruelty we're capable of, and yet paint a picture of how even in such desperate conditions, we can discover hope. Zombies for me were a way of bringing that message to life, and as you would have seen in both Zombiestan and Alice in Deadland, I try and treat zombies a bit differently than just mindless brain eating monsters- but almost a metaphor for the evil we ourselves are capable of unleashing, and in both cases, created by us as a direct outcome of our hate for fellow men.

* I've always had an active (my parents would say overactive) imagination, including going through a year in school with an imaginary friend. Science Fiction allows me to give full reign to that, and take leaps into sometimes fantastic directions instead of being weighed down by everyday reality.

3) Why did you decide to self publish on Amazon.com? What benefits do you get with self publishing this way that you wouldn't typically get with a mainstream publisher?

* I have been widely published in by the big traditional publishers including Random House and Penguin, but for an unknown author who doesn't even live in the , getting a break into the market is very tough. Amazon allowed me to reach American (and other international readers) directly with my work instead of spending months or years pursuing agents and publishers in vain. I was also really inspired by some of the pioneers like Konrath and many of the great folks over at Kindleboards like Bob Mayer, Dave Dalglish, Michael Wallace, Deb Geary and others, as their experiences showed me just what was possible in self publishing. The big advantages are for me flexibility, autonomy and the ability to really create one's own connection with readers without being at the mercy of gatekeepers. The economics also make it a no-brainer given how slow some of the Big 6 have been in really embracing ebooks. Having now spent exactly a year self publishing on Amazon, I am really glad I went down this path.

4) As a follow up to the previous question, do you think there is a downside to self publishing? If so what exactly?

* It's not really a downside, but there is the added responsibility of having to take care of aspects beyond just writing eg. Design, promotion. However, to be candid, even for a traditionally published mid list author (as I was), you are expected to carry a lot of the freight of promotion. I actually enjoy managing the business aspects as it allows me to have end to end control over my work and honestly do more to promote my work than any publisher would perhaps have. Also over time, you realize that you form strong connections with designers (I must give a shout out to Glendon Haddix at Streetlight Graphics who's simply awesome), editors and other who can support you in bringing your work to life, and it becomes much easier.

5) From reading your bio on your author page, I see you have a family too. How many hours do you typically get in a week at the keyboard writing?

* I have a family and a full time day job, so time is certainly at a premium. What I do is take out 30-45 minutes every evening when I do nothing but write. Also I travel a bit in my job and I am very disciplined about not wasting time on flights watching movies etc. Instead I get huge chunks of writing done on flights, in hotels etc. In fact, am typing this as I sit in an airplane some 30,000 feet above the sea on my way back to for a short break. Also, my family is a big pillar of support, which always helps. My wife, Puja has been amazing right from the time I amassed 70 rejection slips for my first novel and really taught me the power of positive thinking, which is essential for any writer. Our son, Aaditya, is about to turn four, and he loves seeing my books with my photo on the back. Of course, he keeps complaining that Daddy's books don't have any pictures in them like his storybooks. In my novel Vimana, I named the lead character Aaditya and you should have seen his eyes when I told him Aaditya would be flying a rocket ship in my story.

6) I see that your father is a prolific writer as well. Is his influence what inspired you to become a writer or did you cultivate the love of writing independently of your father's success?

* My father's is a pretty inspiring story in itself. He began life as a journalist and teacher, but then went to work for the Government for 30 years and totally lost touch with that side of himself. He took up writing after retirement; his first novel was published at the age of 58, and he's now a bestselling author in . I actually was published before my father and encouraged him to write after his retirement, both to rediscover his old love and also to help cope with the loss of my mother, which actually was also a big catalyst for me writing at the pace I do- one of my last promises to her was that no matter what, I would keep writing. So we probably share the same writing bug (or gene, if there is such a thing), and in our own ways, we perhaps inspire each other.

7) What, in your opinion, is the hardest aspect of writing?

* For me, its getting that initial 'spark' or big idea and figuring out what is really a big idea that will connect with readers and what is not. Once I have that, I am usually pretty quick to flesh it out. Inspiration strikes in different forms, and that's what makes the creative process, while hard, so much fun. For Zombiestan, the name suddenly occurred to me one day and it sounded so cool that I began crafting ideas around it. For Alice in Deadland, the inspiration came when I saw a painting someone had done of carrying a gun. One thing led to another, and the idea was born.

8)  From beginning to end, how long does it usually take you to develop a story line, create the characters, write a book, edit it, and then finish it?

* Creating the storyline, characters, broad sketch of the idea usually takes me a couple of weeks at best, and sometimes much longer. The writing process is more predictable. As I said, I am a bit of a maniac when it comes to discipline in terms of writing, and I average at least 750-1000 words a day. At that pace (and with occasional spikes while traveling), the first draft takes around two months. Then I usually give it a break for a few days, think of new ideas, and also read new books in my genre to keep my mind fresh, and then come back to it with fresh eyes for editing, which can take another month or more depending on the rework needed.

9) Do you plan to write more zombie novels in the future or are you going to try different things?

* Up next is the sequel to Alice in Deadland, and then a collection of shorts that serve as the prequel. Once I release them (and an omnibus combining all three), I plan to give zombies a break for a while and work on another idea I have sitting on my iPad.

10) Do you have any advice for aspiring authors out there, or any tricks of the trade, such as getting noticed, which you'd like to share?

1) Don't obsess with the 'how', focus on the 'what'. I see too many people start obsessing about how to promote, how to use social media, building up fan bases etc...all of that is important, but it all starts with having a strong book. Write the best you can, have a great cover, write a sharp blurb, and then take it from there.

2) When it comes to ebooks, time is on your side. Unlike a bricks and mortar store, you won't be taken off the shelf if you fail at first, so remember it's a long term game and play it accordingly. Keep writing- if you do nothing else, keep writing. If one book fails, cry, mope, drink or whatever you need to do to get over it, and then start on the next book by learning from your experience on what you could have done better. Don't lose hope if you don't see the success you want early on, and don't get complacent if you do.  Always look at those who are doing better than you and have the humility to learn from them. I sold 118 copies in my first month on Amazon which was Feb 2011, earning just over $30. It was a dose of reality, but I kept at it, writing more, learning how to get better, and looking for inspiration to a number of folks I've met at the Kindleboards forums, many of whom have seen amazing success. In Jan 2012, I had more than 35000 paid downloads, and you know what? It doesn't make me feel 'successful' or complacent. I just raise my bar and keep looking at people like Konrath, Crouch, Mayer, Geary, Dalglish, Wallace and many more and remind myself that my journey is still only just beginning.

Me: Although this concludes this session, I am really looking forward to more stuff from you and I wish you continued success! Thanks for taking the time to do the interview, it's certainly been a pleasure chatting with you.

Mainak: Thanks, Tristan. I am a firm believer in the idea of paying it forward, and I'm very thankful for everything I have and grateful to all those I've learned from. I would love to help any new writer in any way I can, and my own little piece of real estate in cyberspace is mainakdhar.com. If you're beginning your own writing journey and think I could help in any possible way, just get in touch.